Most of my personal workloads today run in the cloud, but there are use cases (e.g. this annoying Unifi Bug) where I want a server inside our home network. I recently set up an Intel NUC (specifically, a NUC11PAH with an i5) for this version with the awesome free version of ESXi for provisioning workloads. If you are a VCDX or similar you can probably do this in your sleep, but for the rest of us here are step-by-step instructions.

The main challenge is that the standard ESXi installer currently doesn’t have the necessary networking drivers for the NUC11. This means we have to roll our own offline install image. To do this, you will need a Windows host. While there is a MacOS version of Powershell and PowerCLI, it doesn’t support the functionality to create custom .iso images yet.

END_OF_DOCUMENT_TOKEN_TO_BE_REPLACED

The past year has accelerated a shift towards distributed work and at least for some companies that shift seems to be permanent. So how does a remote-work optimized home look like? It is immediately apparent from a week of Zoom calls with blurry images, muffled sound and poorly blurred or replaced backgrounds that we are still collectively figuring this out. This post is my attempt to move towards a best-of-breed home working setup and my final result is shown below.

END_OF_DOCUMENT_TOKEN_TO_BE_REPLACED

It’s official, after four years at VMware I am leaving to pursue a new adventure. VMware was the first time for me to work in a large company (or in fact, any company I didn’t start myself). Martin Casado originally persuaded me to work for him as the CTO for the NSBU and it was a blast to see NSX go from a < $200m run rate to a > $1b run rate. Martin had also built an incredible team that drove Networking Virtualization into the market and changed the enterprise networking space for good.

At VMworld 2015 we did a simple but for VMware groundbreaking demo of NSX working with Amazon Web Services. It was controversial as VMware had its own cloud “vCloud Air” and we were working with a competitor. But the demo showed that VMware could create value on top the hyperscale clouds and together with VMC it became the starting point of what today are the VMware Cloud Services. Launching them during the Day 1 Keynote at VMworld in 2016 in front of a live audience of over 10,000 people was an amazing experience.

VMware’s Cloud Services have come a long way since. VMware Cloud on AWS turned out to be a big success and last year we acquired CloudHealth and Heptio as additional pillars for our cloud portfolio. Amazon is now a strategic partner. With Joe Kinsella and Joe Beda VMware now has two superb CTO’s that are thought leaders in the cloud and container space, and with Milin Desai a great GM to drive the integration. When I joined VMware, it was a data center company. Today it is a cloud company. I am tremendously proud to have helped drive this transition.

It’s been a privilege to work with Pat and see him steer VMware with a steady hand through complex times (and being named #1 tech exec for it) and working for Raghu and Rajiv was a master class in technology strategy and operations. I had a great time at VMware, and I am tremendously grateful for it.

N619TP is back from the Caribbean and safely parked on the ramp at Palo Alto Airport. It has been an amazing experience and I am still digesting the learning from it. For the detailed write up check out Part 1, Part 2, Part 3 and Part 4.

The approximate routing for the return trip is shown above. Total length of the trip is about 6,600 nautical miles (7,500 miles or 12,200 km). The flight had 14 segments, 6 to Punta Cana and 8 back. Heading west will take you more time because of headwinds (up to 40 knots) and customs when entering the US. Longest segment was 5.2 hours from Nassau to Punta Cana. Picking a route far south was the right choice as it kept us out of clouds with icing.

END_OF_DOCUMENT_TOKEN_TO_BE_REPLACED

We expected that this would be the most interesting day of the trip, and it didn’t disappoint. The weather forecast indicated strong headwinds. This meant our original speed and route fuel would have been below the minimums we felt comfortable with. There are a few things you can do about this. Flying at higher altitudes reduces fuel usage, but anything above 12,500 feet requires us to be on Oxygen which I usually try to avoid. We can change the route, which puts us more over water. We can reduce power which gives us more endurance as long as the headwinds don’t increase. Or we can add a fuel stop which means either stopping in the Turks & Caicos (a UK territory) or an additional stop in the Dominican Republic and clearing customs without the support of our handler. We decided on a more direct route (flying more over water) and cruising at 65% power.

END_OF_DOCUMENT_TOKEN_TO_BE_REPLACED

Today was a short segment from Orlando to Nassau, Bahamas. It was also my first international flight and first long overwater flight. Both involves preparation. For any flight leaving the US, you need to file an eAPIS declaration with the DHS listing passengers and crew. This all happens electronically and once you have signed up for the account is fairly quick. We filed 24 hours before and received authorization within an hour. For overwater flights in small planes, life vests for passengers and crew are mandatory. We are also carrying a life raft and satellite phone and the plane has a radio, an ELT, a satellite phone and the CAPS parachute system. Together, that gives us good odds even if we have to ditch.

END_OF_DOCUMENT_TOKEN_TO_BE_REPLACED

Tuesday morning we headed to the airport, and had the fastest IFR departure of my life. San Antonio is enabled for PDC which means we received both our IFR clearance as well as the ATIS electronically in the Uber on the way to the airport. Million Air had already pulled up the plane. Thanks to PDC we didn’t have to call Clearance Delivery (we already had it). Taxi instructions were to the runway next to our ramp and tower gave us an immediate takeoff clearance. PDC is definitely the future, I wish they had this in Palo Alto.

END_OF_DOCUMENT_TOKEN_TO_BE_REPLACED

To end the year, I am planning to do something slightly crazy. The idea is to fly our Cirrus SR22 (pictured below) to Punta Cana in the Dominican Republic and back. It’s a round trip time of 7,400 miles, by far the longest trip I have ever taken as a pilot. It’s also the most complex one due to flying in multiple countries, border crossings, customs, international airport operations. To keep me safe, Mark Erwin (my CFI) is coming along as co-pilot and as we are flying over water we are also bringing a life raft and a satellite phone.

END_OF_DOCUMENT_TOKEN_TO_BE_REPLACED

We have been running an Ark Survival Evolved dedicated server for a while, and it has been a blast. We had up to 12 people playing on it, most of them friends (and some parents) of our kids.

We originally hosted the server on an Amazon Web Services instance, but recently moved it to Google’s managed Kubernetes service GKE. It works great and the deployment was very easy. If you want to do the same, below is how it works.

END_OF_DOCUMENT_TOKEN_TO_BE_REPLACED

Today it was announced that HP intends to acquire Voltage Security. Assuming it closes as planned, it will be a great exit that I am very proud of. Voltage over the past 12 years (it was founded in 2002) has risen from its humble beginnings when we founded it at Stanford has risen to becoming the market leader in innovative encryption technology and is used by over a thousand enterprise customers around the world. 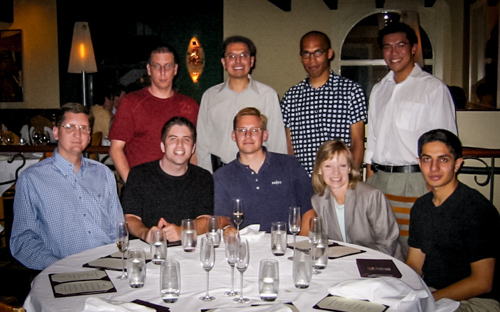